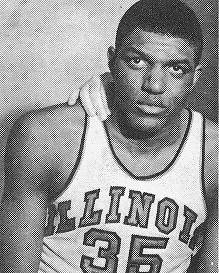 Biography: Govoner Vaughn teamed with Mannie Jackson to lead Edwardsville to a 2nd place finish in the 1956 state finals.  He followed high school with a great career at the University of Illinois where he, along with his former high school friend Jackson, became the first African American letter winners for the Illini.  During his senior year, Govoner won the Rolf Wood free throw trophy and was the team MVP for 1959-60.  After college he played professionally for the Globetrotters, Bulls, and Warriors of the NBA.  He worked as the personnel director of the Detroit Board of Education and in the 1990’s teamed again with Jackson as part of the management group for the Harlem Globetrotters.