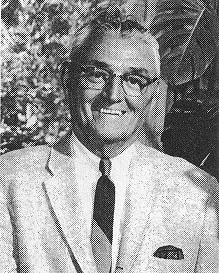 Biography: A.G. (Frenchy) Haussler was honored as one of the 100 Greatest Illinois Sports Celebrities by the Illinois Sesquicentennial Commission in 1968.  He had a distinguished career as an official and athlete.  Recognized as one of the best officials in the Midwest, Frenchy graduated from Peoria Central HS and Illinois Wesleyan University.  He was named to the all time Illinois Wesleyan Five.  He had an outstanding coaching career at Pekin HS and took several teams to the state tournament.  His teams finished third in 1935 and 1937 and fourth in 1938.  At one time he was the acting president of Bradley University, Frenchy finished his career as the Executive Secretary of Bradley University.  He has the distinction of being inducted into the IBCA Hall of Fame as an official (1973) and as a player (1975).  A member of the Greater Peoria Sports Hall of Fame, Mr. Haussler passed away on September 5, 1974.