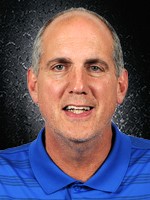 Biography: At (Burbank) St. Laurence High School, Steve was a two-time all-Catholic League selection and a two-time league MVP in 1975 and 1976.  He also was named as a Catholic High School All-American Player and was a two-time Champaign News-Gazette all-state player pick.  After high school, Steve played one year at North Carolina before transferring to Iowa, where he was a three-year starter and led the team in rebounding and field goal percentage during his final two seasons.  He played in four NCAA Tournaments, including Final Fours with both the Tar Heels and the Hawkeyes.