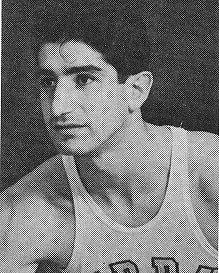 Biography:   Bill Berberian was a two time all state player as he led the great (Harvey)Thornton teams of the late 1930’s and early 1940’s.  In “Beps” three years, Thornton was rated in the top five of the state each year even though Thornton was not a part of the state playoffs due to differences with the IHSA.  Bill went on to Purdue where he was an all Big Ten selection and captain of the Boilermakers during his senior year.  After college, Bill went on to a very successful coaching career at West Lafayette HS in Indiana.  He died on December 6, 2020 at the age of 96.