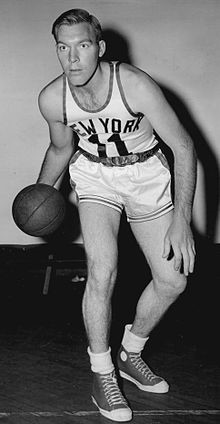 Biography: Harry Gallatin attended Wood River and Roxanna High schools.  From there it was on to Kirksville College, in Missouri (today—Truman State University).  Harry is best known for his pro career with the New York Knicks where he received his nickname “The Horse” for becoming the first player in NBA history to play in 700 consecutive games.  He scored 8,843 points and grabbed 6,680 rebounds during a career that saw him selected to 7 All Star games in 10 seasons.  After his playing days, Harry coached the St. Louis Hawks, the New York Knicks and spent a stint as the head coach at Southern University.  In the 1962-63 season, he was honored as the NBA Coach of the Year.  Harry completed his career on the staff of SIU-Edwardsville while also serving as their golf coach.  Harry passed away on October 7, 2015.