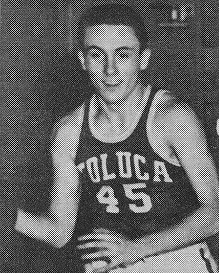 Biography: Tom Gardner is still considered to be one of the best guards to ever come from Central Illinois.  Tom was a four-year regular for Toluca High School and its Hall of Fame coach, Chuck Rolinski.  During that time (1959-62), Toluca was 108-12 with 4 regional titles and 2 sectional runner-up finishes among numerous other championships.  Tom set the 4-year scoring record of 2,100 points, was All Northern for three years, Little All state for one year, Big All State, two years, MVP two years and all conference three years.  Tommy “G” was an outstanding small school player who epitomized the best in Illinois prep basketball.