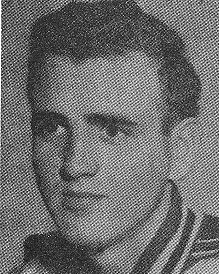 Biography: Charles (Bud) Grover led Dundee to third place in the state tournament in 1946 and was named to the all-tournament team.  Dundee was rated number one in the state in 1947 for most of the season, due to the play of All State Player Bud Grover who averaged 20 ppg.  While Dundee lost in the quarterfinals that year, Bud went on to play at Bradley University for teams that went 114-20 during his four years as a regular.  In 1950. Bradley finished second in both the NIT and the NCAA to City College of New York.  Led by the defensive prowess of Grover, Bradley was rated number one in the nation by the AP in 1950.  After his playing days, Bud was the athletic director and basketball coach in (Woodstock) Marian Central Catholic High School.