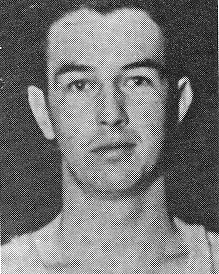 Biography: Dar Hutchins has the distinction of having played on two different Hall of Fame Teams, the 1933 (Harvey) Thornton High School Flying Clouds and the 1938 Bradley University Famous Five.  Dar played on two state finalist teams while at Thornton and was an All State Player each year.  He went to Bradley University where he starred for three years as an All-American Player for the Bradley Famous Five.  He then played three seasons for the Hammond Ciesar All Americans of the National Basketball League.  Dar passed away on October 9, 1985.