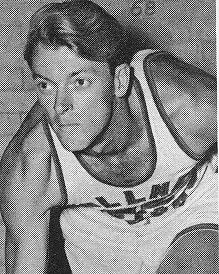 Biography:   Walt Kirk, Jr. is one of many great all-state basketball players to graduate from Mt. Vernon High School.  Walt’s basketball career is legendary in the southern Illinois area.  An all-state player in 1942, Walt went on to a distinguished career at the University of Illinois.  While there, he was all Big Ten for three consecutive years, an All-American player in 1945 and the Illini captain in 1944 and 1945.  After college, Walt had an outstanding professional career with the Ft. Wayne Pistons, the Tri-City Blackhawks, and the Anderson Packers of the NBL.  After his playing days ended, Walt was an outstanding coach at Salem HS and in Dubuque, Iowa.  Walt finished his career as an administrator at Hempstead HS.  Walt Kirk, Jr. passed away on December 12, 2012.