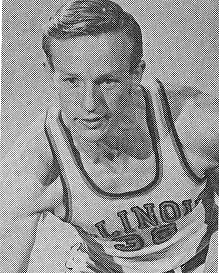 Biography:   Ken Menke had a great career at Dundee HS.  He led them to the State Championship in 1938 and back to the state finals in 1940.  Ken was an all-state player in both 1939 and 1940.  After graduating from Dundee, Ken went on to become a member of the Hall of Fame “Whiz Kids” of the University of Illinois.  He was an all Big Ten player in 1942 and again in 1943.  Both of those teams were Big Ten Champions.  After college Ken played professionally for the Ft. Wayne Pistons and the Waterloo Hawks.  Ken stayed a part of basketball after his playing days as an outstanding official for many years.  Ken Menke passed away on September 2, 2002.