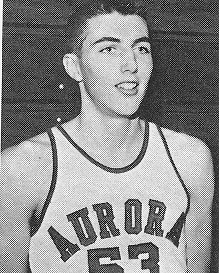 Biography: Bill Small played at Roanoke-Benson High School and Aurora West High School before moving on to the University of Illinois.  While at Aurora West, Bill earned all-state and all-American player honors while setting numerous school records.    He led his teams to a 4th place finish in the 1958 IHSA Tournament and a 2nd place in 1959.  After playing for the Illini as a regular for three years, Bill went on to play with the Detroit Pistons and the Akron Goodyear team that won the 1964 AAU national title.  After his playing days, Bill worked as an industrial relations manager.