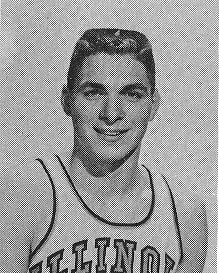 Biography: John Wessels was one of the all-time great players to graduate from West Rockford HS.  He is one of only a few players in Illinois basketball history to lead his team to two consecutive state championship games.  He averaged nearly 20 ppg for the two years playing for Hall of Fame Coach Alex Saudergas.   In 1955 and 1956 those teams won the state championship.  John went on to the University of Illinois where he starred for three years.  John Wessels passed away on December 3, 1994 at the age of 66.