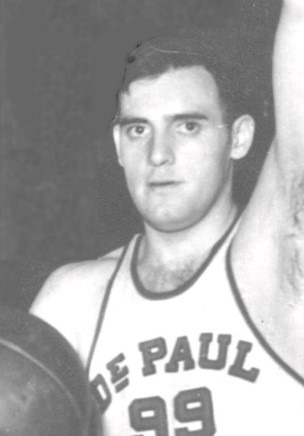 Biography: Ed starred for (Oak Park) Fenwick High School from 1932-35.  He led the team to the 1935 CatholicState Championship.  He was a three-time unanimous all-state player selection and one of the pioneers of the one-handed shot that revolutionized the game.  A multiple sport athlete, Ed was recruited to The University of Notre Dame for football and scored 5 touchdowns and rushed for 500+ yards in a freshman vs varsity scrimmage.  Unhappy with Notre Dame at that time, he transferred to DePaul University and starred in basketball, earning a spot in the Blue Demons’ Hall of Fame.