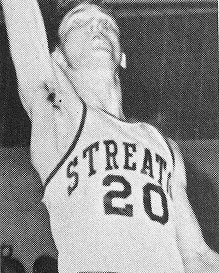 Biography: John A. Bailey ended a 20-year drought for all-state basketball players at Streator High School when he was named to teams selected by the Associated Press, The Chicago Daily News, The Chicago American, and The Rockford Morning Star.  In addition, he was an honorable mention prep All-American by Coach and Athlete magazine.  Following his prep career, Bailey attended Michigan State University where he was a two-year regular and was named captain and outstanding senior in 1968.  He was selected for the East-West All Star game in 1968.  In 1971, John coached (Waterford, MI) Our Lady of the Lakes HS team to the state parochial quarterfinals in Class D.  He then spent time as both the boys and girls head coach in Rochester, Michigan.