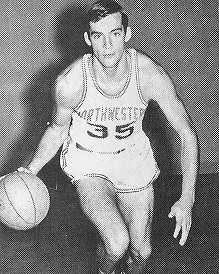 Biography:  Jim Burns led McLeansboro to a 4th place state tournament finish in 1962 and was named as an all-state player. Burns was the highest scorer ever as a sophomore at Northwestern (410) points for a 17.1 ppg average.  He was fifth in scoring in the Big Ten as a junior with a 20.2 ppg average while pulling down 195 rebounds, most ever for a Wildcat guard.  Burns again was fifth in the Big Ten scoring as a senior (21.5 ppg) while scoring 472 points for the season.  Jim was a member of the All Big Ten Academic teams as a junior and senior.  He was an All Big Ten and All-American player as a senior.  Jim was selected in the 4th round of the 1967 NBA draft by the Chicago Bulls.  After playing briefly for them, Jim finished his only professional season with the Dallas Chaparrals of the ABA.  In 2000, Jim was appointed by Illinois Secretary of State Jesse White as his inspector general.