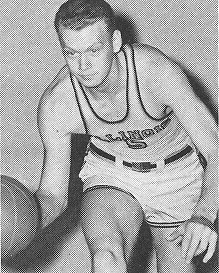 Biography: Walter A. “Hoot” Evers baseball accomplishments have probably made many people forget his basketball prominence.  Before the major leagues, Hoot first attracted attention as a member of the Collinsville High School Kahoks, leading them to their 3rd state tournament in 1937 and winning their first trophy for 3rd place.  After high school, Evers played basketball at the University of Illinois.  His post collegiate career is best remembered in baseball as he played for several teams including the Detroit Tigers, Boston Red Sox, New York Giants, Baltimore Orioles, and Cleveland Indians.  Walter finished his playing days and worked in player development for the Tigers.  “Hoot” Evers passed away on January 25, 1991 after suffering a heart attack.