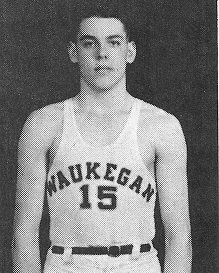 Biography:  Otto E. Graham, Jr. is most remembered as the passing wizard of pro football’s immortal Cleveland Browns of the late 1950’s and early 1960’s.  His first claim to fame came as a basketball player at Waukegan High School.  His prowess on the football field earned Graham only a third team all state position in 1938.  It was basketball which earned Graham a scholarship to Northwestern.  Graham, it is believed, is the one of the few collegians to earn All-American player honors in both sports in the same school year (1943-44).  Graham signed with the Cleveland Browns and played quarterback for legendary coach Paul Brown in 1946 and then joined the Rochester Royals for the 1946-47 basketball campaign.  After his playing days, Otto served as the football coach and athletic director at the United States Coast Guard Academy.  Otto Graham passed away on December 17, 2003 at the age of 82.