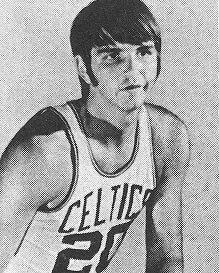 Biography:  Rex Morgan was an all-state basketball player at Charleston High School where his 24 ppg average earned him Honorable Mention All-American honors.  In junior college Morgan was once again an All-American player which earned him an opportunity to attend Jacksonville University.  At Jacksonville, Rex was a Helms Foundation All-American as a junior and the most valuable player in the state of Florida with an average of 27.6 ppg.   During his senior year, Rex was selected for the All-American Game in Memphis and the Aloha Classic in Hawaii.  From there he played two seasons with the Boston Celtics and served as player-coach of the 1974 AAU national champions.  Rex was selected for the United States team which played in the Governor’s Cup in Brazil in 1974.  During the 1974-75 season Rex led his AAU team to a 61-1 record.  Rex Morgan died on January 15, 2016.