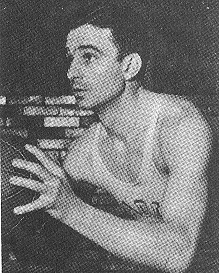 Biography:  In three seasons of varsity play at Morris High School, Ted Panish led the squad to a 75-10 record.  After high school Ted attended Bradley University where he was a member of BU’s “Famous Five”.  This team played in the first NIT in New York in 1938.  In 1939 the Braves and Panish finished third in the tournament.  Panish played on the Bradley teams which won 50 straight games in the Little Nineteen Conference.  In 1937 Ted was named the conference MVP.  Bradley compiled a 69-8 record during Ted’s years in Peoria.  After college, Ted stayed in the Peoria area serving in many capacities including as athletic director at East Peoria HS. Ted Panish passed away on January 7, 1991.