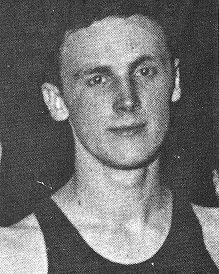 Biography: Joe Reiff began has basketball career at Chicago’s Crane Tech HS.  Crane won the City of Chicago championship in both 1928 and 1929.  He then attended Northwestern and was the leading scorer in the Big Ten Conference in the 1931 and 1933 seasons.  Reiff’s scoring was a big reason why Northwestern University won its only basketball championship in those years.  Reiff eclipsed the Big Ten scoring mark for that time which had been set by John Wooden of Purdue.  Reiff is a member of the College Basketball Hall of Fame.  After his playing years, Joe was a Big Ten basketball official for over a decade.  Joe Reiff passed away on February 9, 1988.