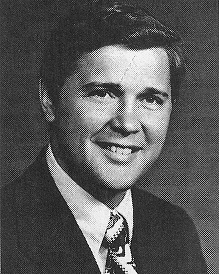 Biography:   Dr. Fred Riddle, Jr. had the honor of participating in the state high school tournament with two different teams—Madison, 1959 and Collinsville, 1961.  With Madison, Riddle was a second team all tournament performer.  He was a first team all tournament choice two years later with the champion Kahoks who compiled a 30-2 record enroute to the title.  Sometimes over-shadowed by teammate Bogie Redmon, an earlier IBCA Hall of Fame selection, Riddle averaged 20 ppg for the season and was the tournament’s second leading scorer.  Fred attended Iowa where he played football and became a dentist in Iowa City.