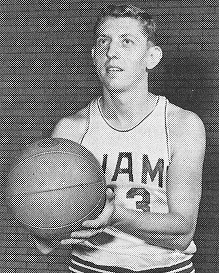 Biography: Paul Schnackenberg was the leader of the 1943-44 (Chicago) South Shore team.  They were the first squad from the Chicago Public league to make its presence felt in the state basketball tournament by finishing in third place at Champaign—the highest finish to date for a Chicago team.  Paul was the team’s high scorer and captain.  The Chicago Prep Writers Association named Schnackenberg their MVP for his fine season.  Paul went on to letter for four seasons at Miami of Ohio where he was also the team’s MVP during the 1948-49 season as well as being named to the all MAC team.  The 1948 University of Kentucky NCAA champions honored Schnackenberg by naming him to their all opponent team.  Paul is a member of the Miami University Athletic Hall of Fame.