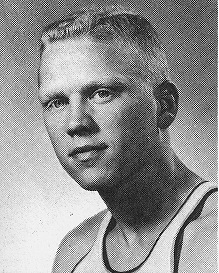 Biography:  Milton “Sharm” Scheuerman was a standout basketball and football player at Rock Island HS before achieving fame as a star guard on two University of Iowa Big Ten Championship teams.  Scheuerman was one of the fine players on the Hawkeye teams that ruled the Big Ten in 1955 and advanced to take 4th place in the NCAA tournament.  In 1956 he again led the squad to a league title and on to a 2nd place NCAA finish.  During the 1955-56 season, Sharm averaged 10.1 ppg and was the Midwest NCAA Regional Tournament Team.  After completing his playing days, he returned to Iowa as the freshmen basketball coach.  Sharm Scheuerman passed away on August 30, 2010.