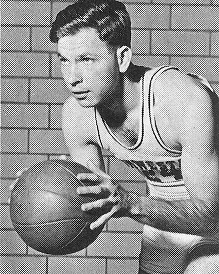 Biography:  Chester Strumillo played an important role on (Cicero) Morton High School’s consecutive Suburban League Champions from 1940-1942.  He was an all conference choice in each of those three seasons and a team captain his senior year.  In that season, the Norm Ziebell-coached team ended the 42 game win streak of the Dike Eddleman Centralia Orphans team.  As a freshman in 1943 at the University of Illinois, Strumillo teamed with Eddleman and Fred Green to scrimmage the famed Illini Whiz Kids.  Chester was then called to the armed forces where he played service basketball with Sheppard Field, TX, the champions of the first Air Force Tournament; he was named the tournament MVP.  After the armed forces, Chester returned to college basketball to play three seasons with Northwestern University, earning his degree in accounting.  Chester Strumillo passed away on July 27, 2010.