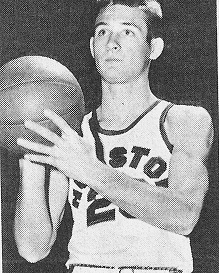 Biography:   Bill Tuffli was the first Highland HS freshman to make the varsity team in 1951.  In his second year, Bill helped the Bulldogs defeat Collinsville and make the Sweet Sixteen (1953).  As a junior and senior he continued to star for the team and finished his career with 1,945 points scored.  Bill began his collegiate career at the junior college level, first at Chipola (FL) and then at Joliet (IL).  He finished his outstanding career at the University of Houston.  After college, Bill returned to Highland and worked in the business world.