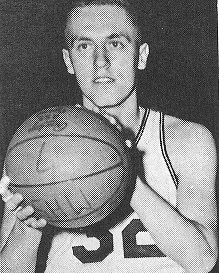 Biography: Don “Whitey” Verstraete led Moline High School to state tournament appearances in 1954 and 1955.  In 1954, Whitey was named to a 3rd team all-state spot as he averaged 13 ppg.  The following year, he upped his scoring to 19 ppg and earned 1st team all-state honors.  In 1955 he was selected to play in the North-South HS Game in Murray, KY., before playing for Georgia Southern University.  In his three varsity seasons, Whitey scored 1,519 points (3rd best in school history) and grabbed 975 rebounds.  After college Whitey returned to the Quad Cities and served for a time as an assistant coach at Rock Island HS. He was the head coach at both Rock Island High School and Moline High School.  His teams earned 4 regional crowns, 2 sectional titles and 1 quarterfinal appearance in the IHSA tournament.  Don Verstraete passed away on August 27, 2004.