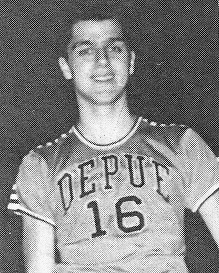 Biography: DePue HS had 110 students in 1957 of which 14 were seniors.  Fortunately, one of those seniors was Ron Zagar.  The Little Giants played a schedule against larger schools, posting a 19-8 record, with Ron averaging 15 rpg.  He also averaged 37.6 ppg in that season.  In his 93 varsity games, Zagar amassed 2,515 career points for a career 27.7 ppg average.  This was in the era before the 3-point line.  For each of his three varsity seasons Ron was DePue’s MVP and an all-state selection.  After high school Ron had 125 collegiate offers before he chose to play at the University of Iowa.  After college, he played one season for the Chicago Majors of the short-lived ABL.