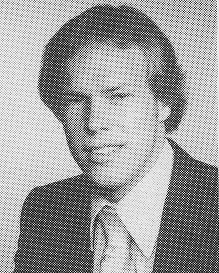 Biography:  Mark Barwig has the distinction of being one of the few players of his era to play on teams that three times defeated perennial champion UCLA.  A graduate of Bloom HS in 1972, Mark played for the University of Oregon teams that did just that as a member of the original “Kankakee Kids” group for the Ducks.  During the 1975-76 season, he had a hand in ending UCLA’s 98 game home winning streak as Oregon gave UCLA their worst Pauley Pavilion loss to date by a score of 64-45.  At the time of his graduation, Barwig was 37th on the Ducks’ all-time scoring list with 599 points and played in two NIT tournaments.  At Bloom, Mark set single game marks for rebounding (29) and free throws (20).  As a senior he scored 653 points, grabbed 414 rebounds and handed out 268 assists.  He shot 70% from the field that year and left Bloom with a career mark of 53.7%.  During his high school career, the Trojans were 64-14.  After college graduation, Mark served Oregon as an assistant coach.