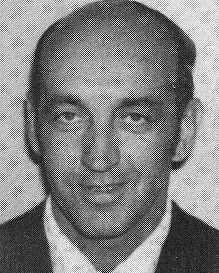 Biography: The late Patrick L. Dunn played high school basketball for (Chicago) St. Patrick HS where he was named to the Catholic All Stars in 1949 and 1950.  He was all Chicago and all Chicago area for the same years.  Additionally, Dunn was a member of the Champaign News-Gazette All State Team in 1950.  Dunn played his college ball at Utah State where he earned all Skyline Conference and honorable mention All-American Player recognitions.  Pat is a member of the Catholic League Hall of Fame.  He also played briefly for the Philadelphia Warriors of the NBA.  Sadly, Patrick Dunn died of Leukemia on November 11, 1975.