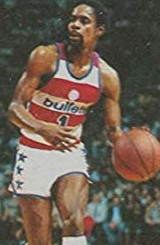 Biography:  Kevin Porter was good enough to earn a starting guard spot at Chicago’s DuSable HS as a sophomore.  That year he averaged 15 points and seven assists per game.  This increased during his junior season to 20.7 ppg and 9 apg; his senior season it was 22.9 ppg and 13 apg.  Kevin was an all-city and all-area player in both the 1967 and 1968 seasons for coach Jim Brown.  Porter led DuSable to the last Chicago Daily News Christmas Holiday Tournament Championship.  Porter was a third-round draft pick of the Baltimore Bullets out of St. Francis (PA) University.  During his first NBA season, he led the Bullets into the 1975 championship series.