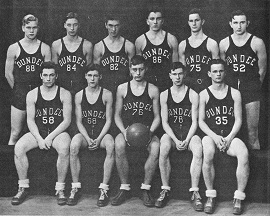 Biography: The Dundee High School State Champions of 1938 was one of the great teams in an era when many excellent teams played throughout the state of Illinois. Losing only one game that year, the squad was known for their team discipline, great shooting and superior efforts on defense. Coach Eugene DeLacey is one of the original 1973 inductees to the IBCA Hall of Fame as a coach. His teams of the 1930’s and 40’s were among the best that the state had to offer.