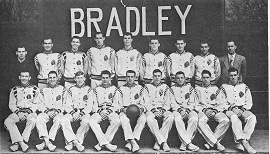 Biography: The 1949-50 Bradley Braves remain the only team in NCAA history to finish 2nd in both the NCAA and the NIT tournaments. The Braves were ranked as the number one team in the nation for the entire season. In the NCAA tournament, they beat Kansas, Baylor, and UCLA before losing the championship game to CCNY 71-68. The same two teams met in the NIT with a similar result. Bradley also won the Missouri Valley Conference Championship with an overall season record or 32-5.