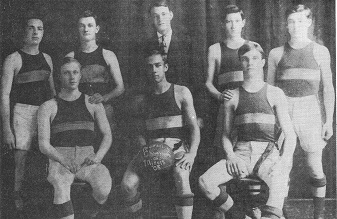 Biography: Peoria High School (now known as Peoria Central) was declared the first Illinois State High School Basketball Champion in 1908. The finals were held at Oak Park, IL YMCA on March 28. Rock Island was defeated 48-29 for the championship. The team record that season was 17-1. The one loss was to Peoria Spalding 21-10 whom they had defeated at an earlier date by a score of 43-23. Some opponents that season were Bradley University, Rock Island, Ottawa, Rockford, Washington, Streator, and Davenport, IA. Home contests were played at the Peoria YMCA. The team was declared City Champions and apparently was invited to participate in the state tournament. An interesting highlight during the season, was the 105-23 victory over Streator. Bill Forrest scored 22 field goals in that game. He and Lynch Conway were the team’s high scorers for the season. In those days, there was a “jump ball” after every successful field goal.