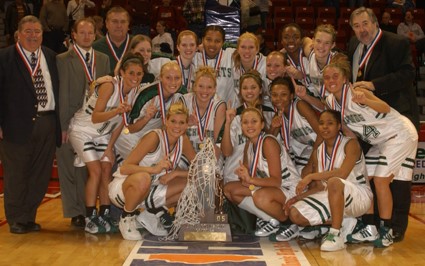 Biography: The 2004-05 Richwoods Lady Knights completed an outstanding season where they went a perfect 38-0 and captured the championship of the Illinois Girl’s 3A State Tournament.  Along the way to a 38-0 record, they were champions of the Mid-State 6 Conference. They were also Galesburg Tournament Champions, Sterling Holiday Tournament Champions and Champions of the State Farm Classic.  They won the Regional Championship as well as a Sectional Championship with a 50-41 win over Normal Community. In the round of the Elite 8, they scored a 48-43 win over (Oak Park)Fenwick.That earned them a trip to the Peoria Civic Center for the round of the Final Four. They opened tournament
play, scoring a 59-51 win over (Chicago) Whitney Young, then captured the state championship with a 52-48 win over Bartlett. They ended the season ranked 2nd in the Midwest, and 8th in the Nation by USA Today.