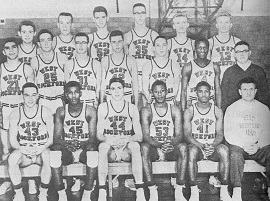 Biography:   At the time of their title, the 1956 West Rockford team was the tallest team to win the state championship.  This highly polished and well coached team swept through the season with a 28-1 record.  Many of the players went on to great careers in collegiate basketball.  This squad accomplished the rare feat of winning consecutive state titles (they had won in the previous season).