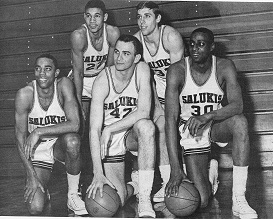 Biography: The 1967 Southern Illinois University Salukis Team was one of the finest college teams ever to represent the state.  SIU was the first Illinois team ever to win an NIT tournament in Madison Square Garden.  The Salukis were noted for their great defensive style and were one of the leading defensive teams in the nation.  Walt Frazier and Dick Garrett both went on to excellent careers at the pro level.