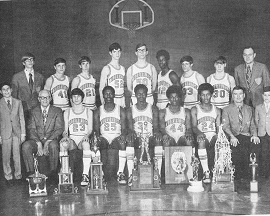 Biography: The 1971-72 (Dolton) Thornridge Falcons, undefeated at 33-0, are considered by many long-time viewers of the state series as the best team of all time.  This season came in the midst of the state record of 54 consecutive victories.  The Falcons averaged 87.5 PPG against a defense that allowed only 55.5 PPG, for an average margin of victory of 32 PPG; their closest game was a 14-point spread.  They were the only team in Illinois history to be a unanimous #1 in both the AP and UPI polls for the entire year.  They were acclaimed as the top team in the nation for 1972.