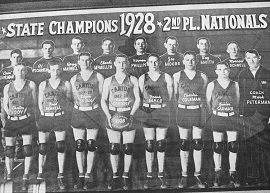 Biography: The 1928 Canton Bulldogs won the state championship over West Aurora on their ninth trip to the state finals.  The season record was 37-7.  Canton accepted an invitation to play in the National High School Tournament where they finished second to Ashland, KY.  This was the best finish of any Illinois team in the national tournament.  In the decade of the 1920’s, Canton was one of the best teams in Illinois prep basketball.  They were coached by the late Mark Peterman who is a charter member of the IBCA Hall of Fame.