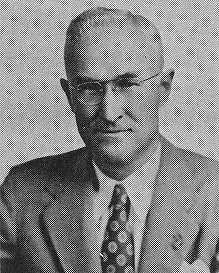 Biography: LaRue Van Meter never saw a basketball game prior to enrolling at Illinois Wesleyan University in 1920.  He learned quickly for he built tiny Johnston City into an athletic power.  After unspectacular 12-11 and 3-14 records his first two years, Van Meter’s club of 1929 captured the state championship by defeating Champaign 30-21 to cap a 29-3 record.  His 1931 team placed fourth.  Van Meter moved to Illinois College in 1932 where his basketball teams were 61-42.  Collinsville coach Vergil Fletcher says of Van Meter, his high school and college coach, “I consider Van Meter the greatest coach I’ve ever been associated with.”  LaRue was also a football coach at Johnston City where he posted a 29-13 mark.  In 1938, Van Meter left coaching to study law and became a successful attorney in Falls Church, VA. LaRue was the city attorney for Falls Church from 1948 until his retirement in 1974.  LaRue passed away on December 17, 1981.