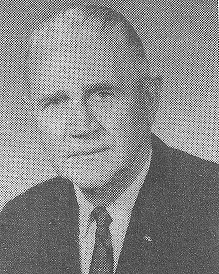 Biography: Robert Wixom is truly one of Illinois’ top small school coaches.  Wixom spent 17 seasons as the basketball coach at Rushville HS after one at Table Grove.  His record is a sparkling 295-180 during those 18 seasons.  Although a small school, Rushville routinely played many large schools from the central and western Illinois areas including:  Quincy, Pekin, Lanphier, Peoria Central, Champaign, Collinsville, Springfield, Kewanee, and Lincoln.  His teams entered 18 invitational tournaments and won 9 of them including the 1937 Dekalb Holiday Tournament.  Eight times Rushville teams won regionals and twice they gained the Sweet Sixteen—in 1937 and 1940.  The Rushville teams of that era won 8 conference titles, while the Table Grove team also won its conference during Wixom’s year there.  Robert was from Janesville, Wisconsin and attended Milton College.  As a collegian, Robert played 4 years of football, basketball, and baseball.  Robert played every minute of every game during his college football career.  He also excelled as a football coach for 22 years with a 92-80-11 record.