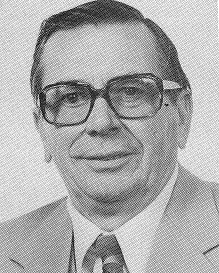 Biography: Chuck DeWild had served as a basketball coach for 35 seasons at the time of his 1981 IBCA Hall of Fame induction. After surviving a plane crash in Holland in 1944 and eight months in a German POW camp, DeWild returned for his senior year at Central College of Iowa. After two seasons at Donnellson, (IA) High School, DeWild moved to Illinois where he served Fulton High for 10 years. Under DeWild, the Steamers were 172-93 and claimed 5 IHSA Regional titles and 9 holiday tournament crowns. In 1958 DeWild moved to Riverside-Brookfield High School for three years and an 18-47 mark. At R-B, DeWild hired future Hall of Fame Coaches Jerry Leggett and Ron Nikcevich as his frosh-soph coaches. Starting in 1961, DeWild struggled through six seasons as the Rockford College coach with only 23 wins before giving the Regents a winning season. In 20 years at Rockford College, DeWild compiled a 202-293 record. Overall DeWild’s record was 407-456. Chuck DeWild passed away on March 29, 2011 at the age of 88.