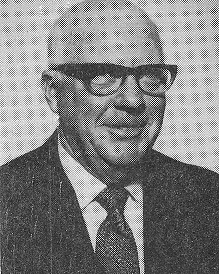 Biography: The Galesburg-Quincy basketball rivalry is one of the state’s keenest. One might wonder how many times the timer at Quincy High School, Don H. Sloan drew the wrath of the Galesburg fans. It is even more curious when one considers that Don was actually a graduate of Galesburg HS and was the timer for the Galesburg Grade School League for several years. Don served as six years as timer at Quincy Notre Dame High School and was the timer for the1974 and 1975 Class AA state tournaments. He was varsity golf coach for 24 years at QHS, varsity wrestling coach for 9 years, and line coach for 13 football seasons. Don was the first chairman of the Illinois Golf Coaches Association and was named Golf Coach of the Year in 1972. He served as a timer for football, soccer and basketball in Quincy for nearly 40 years.