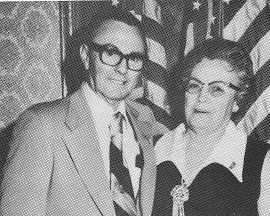 Biography: Two of the Champaign area’s top basketball fans were George and Nina Miller. They had attended more than 2,000 basketball games in the 45 years leading up to their 1981 IBCA Hall of Fame induction. The couple had the same seats in Champaign’s Combes Gymnasium from the time it opened. They had season tickets to the University of Illinois Basketball games since 1940. They were the type of fans who are the first into a gymnasium and almost the last to leave, even when their favorite team loses. The Millers have also been active for the Illinois wrestling team. George was a timer for most Illinois Big 10 wrestling meets. The Millers explain their devotion to Champaign Central and Illinois simply, as “We enjoy basketball.”