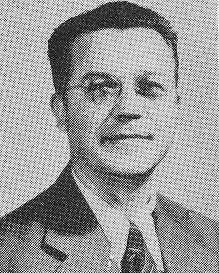 Biography: John Symer served as the official timer for Lebanon High School basketball games for 38 seasons.  Additionally, he served in the same capacity for McKendree College for 16 seasons.  Add 13 seasons at Lebanon Grade school and John was truly a fan in the Lebanon community.  His expertise led to his being invited to serve as official timer for the 1961 and 1962 State Finals in Champaign.  The McKendree Rotary Tournament and NAIA District Tournament also found John at the timer spot.  All Lebanon sports teams could count on John’s support during their fundraising efforts.  In the spring John helped as a starter/timer for the Lebanon track teams.  In total, John tended the clock for over 2800 athletic events.  John died on November 28, 2005 at the age of 95.