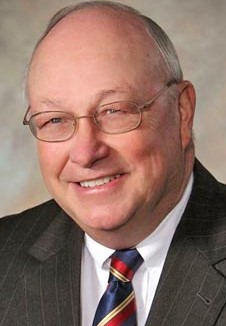 Biography: At the time of his 1984 Hall of Fame induction, Neal Ormond III was in his 20th year as a sportscaster for high school and college basketball, football, and baseball in the Aurora area for radio station WMRO-AM. His primary assignment was coverage of West Aurora High School, his 1958 alma mater.   As the voice of the Blackhawks, had covered 47 of the highly contested West Aurora-East Aurora basketball games. He sportscast five state baseball finals and the previous 13 Pontiac High School tournaments, along with the previous 19 Illinois State High School finals. At WYBC-AM-FM in New Haven, Conn., from 1958-1962, Ormond was chief sportscaster for all Yale University play-by-play. From 1962-1964 he served as KZSU-AM broadcaster of Stanford University football and basketball. During 1969-70, he served as newscaster and sportscaster for all Fox Valley area high schools and Northern Illinois University. Always available, Ormond has served as emcee of numerous school sports award dinners.