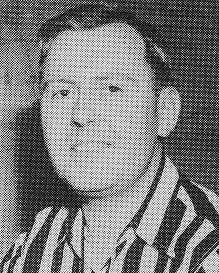 Biography: Wallace (Wally) Grace may have qualified for HOF consideration as a coach having won over 75% of his games while coaching at Keensburg, Brown, Crescent-Iroquois, and Arlington Heights.  He was inducted in 1978 for having officiated in 619 games at the junior high, high school, college, and semi-professional levels.  Wally was quite proud of the fact that home and visiting teams were equally successful when he was on the game.  Unfortunately, Wally never worked a state finals game.  According to a letter from then IHSA executive secretary CW Whitten, this was only because Grace had moved from the South to the North in 1942.  In that era, there were only two officials chosen from each geographic part of the state to work the finals.  These were chosen from the officials who worked the Sweet Sixteen.  Wally retired from officiating in 1955 having sworn that he wouldn’t put a whistle to his mouth after the age of 50.  Many coaches statewide wished he had reconsidered that decision, showing the vast respect he had earned.