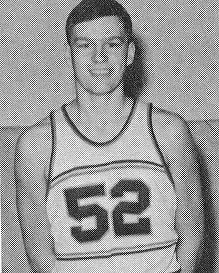 Biography: Don Johnson was one of the great small school players in the history of Illinois basketball.  Don received all state player honors for two consecutive years; he was picked as one of the top 100 high school players in the nation in 1967.  At the time of his induction in 1974, Don held all scoring and rebounding records at Roanoke-Benson High School.  From there he attended the University of Tennessee where he was an All SEC First Team selection during his senior year.  Twice he was the MVP of the Volunteer Classic.  Upon graduation in 1971, Don was the 7th leading scorer in Tennessee history.  He also made two appearances in the NIT with the Volunteers.  The Baltimore Bullets picked him in the 5th round of the 1971 NBA draft.  Don Johnson passed away on March 18, 2009.