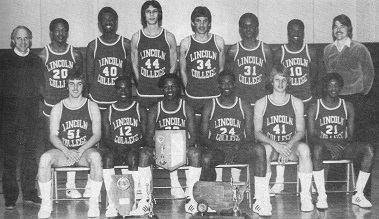 Biography: The Lincoln College Lynx were the first Illinois Junior College to play for the National Championship in 1981.  They possessed the talents that make all teams great.  Led by 1st Team NJCAA All-American Player, Fred Watkins, and 1st Team National Tournament, Julius Poinsette, the Lynx set a school record of 33 wins in one season, won their 2nd consecutive state championship, beat 3 of the top 5 ranked teams in the nation (2 of them were undefeated at the time), enroute to their quest for a national championship.  They were also led by guard Chris Jones, winner of the prestigious Sesher Sportsmanship Trophy.  Their dedication to team play, both on the floor and from the bench made them a crowd favorite as the represented the state of Illinois proudly at the NJCAA Finals.