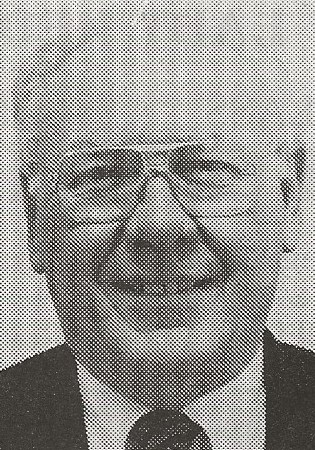 Biography: There are seven stops on the head coaching career of Bill Hungate. He spent two seasons at Pleasant Hills before a one-year stint at St. Patrick, Mo., and a two-year stay at LaBelle, Mo. Hungate returned to the Illinois high school season for two years at Plymouth before venturing to the West Coast for six years at El Segundo, Calif. Central Illinois beckoned and Hungate returned for seven campaigns at Abingdon High School and then the start of 16 years at Carl Sandburg College in 1962. During his travels Hungate amassed a 581-532 record. Twice his Carl Sandburg teams earned berths in the Region IV NJCAA (state) tournament. While at El Segundo, Hungate coached Keith Erickson, who played on John Wooden’s 1965 undefeated team at UCLA.  Dwight Jones, who played at Pepperdine University and later served as head coach at Long Beach State also played for Hungate at El Segundo as did Pete Beathard, the former Southern California quarterback and signal-caller for the Kansas City Chiefs. Hungate left Sandburg to take an account executive position with WAIK/Q93 radio in Galesburg during 1984. Hungate returned to Carl Sandburg as athletic director in1986, in addition to his radio position. Hungate’s daughter Mary Kay, also was inducted into the IBCA Hall of Fame in 2020.  She served her father as Sandburg women’s coach and is also remembered as the coach of the great (Peoria)Richwood’s girls’ teams of the 1970’s and ‘80’s.