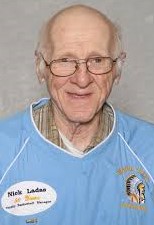 Biography: Nick Ladas has been the Maine West Basketball Manager and emotional leader since the school opened in 1959.  Nick is the ultimate definition of a “Superfan”.  Nick makes sure the video equipment is ready and the scorebook, shot charts and water jug are in their proper places.  Nick has never missed a game since 1959 and to show his dedication Nick rode his bike in winter weather from Maine West to Deerfield (15 miles) after missing his ride. Stunning the Maine West crowd, he arrived while the game was still being played.  One of the former Maine West basketball coaches stated: “Nick is as much a part of Maine West as the building is.”